Two years later, in 1912, he travelled back to Belgium by ship (Lapand). Josephine Joly, a Belgian woman from Herent, accompanied him. He married her in South Bend on November 30, later that year. He started off as a farmhand, but began his own farm after a couple of years. Just as his brother August, he lived in the area of South Bend, first in Lincoln Township, later on in Walkerton. They had 3 children: Marcelian M. (1914), Madelene (1916) and Albert Louis (1917).

In 1947 Charles travelled with his wife to Belgium by plane (Pan American Airways). In 1951 he visited again with his brother. This time he flew with Sabena. 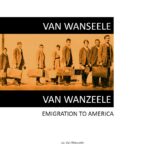